There’s been a record breaking 13 live chats this week, it’s been all stations go! And with only 2 weeks left, it’s time for students to VOTE for their favourite scientist to be 11 – 19 Zone champion and win the £500 prize for science engagement! 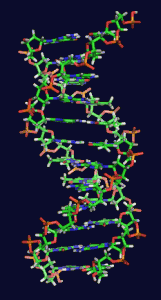 "Can DNA be changed and rewritten like computer code?" See student question. Image by Zephyris at the English language Wikipedia

Students have also been stretching their imaginations, asking the scientists over 150 questions this week.

Scientists and students have been giving their theories on: “when you get butteflies in your stomach what actually is it?”

And Maria and Amylou have been explaining: “why can’t girls put mascara on with their mouths closed?“

Drugs in Sport has also been a big theme: “how can drugs affect the brain of the athletes?” and “do performance enhancers give an athlete a psychological advantage as well as a physical one?”

BUT question of the week is from student mrstagg, who was nominated by Jemma: “Can DNA be changed and rewritten like computer code?”

Students at West Kent Learning Federation Student Support Centre asked some pretty grizzling questions, including: “is it possible to rip every tissue in your body?”

While students at  Stewart Melville College, quizzed Mark L.: “how did scientists make a synthetic burger in a lab?“

St Philomenas students wanted to know: “When in our lives are our bones strongest?”

And students at Newport Girls School gave the scientists some pretty limited options: “Would you rather be attacked by a big bear or a swarm of a bees?“

Next week’s In the Zone scientists are:

A big thanks to Pete and Jemma for helping out in the extra live chats this week! Also thanks to Amylou, Maria, Mark U., and Mark L. who have all finished their weeks In the Zone!

Student marinaley says: “thank you for this oppourtunirty its been well valuable“